Thank you for your interest in God Hates Cartoons. Should you need additional information or want to schedule an interview, please feel free to contact cecilia[AT]brightredrocket[DOT]com and we’ll be happy to take care of you.

For a downloadable copy of the press release (as an MS Word document), Click Here.
You can view the trailer for the DVD here and download stills and images for web or print below.
There is also a short bio of each of the artists well down the page at this location. 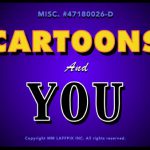 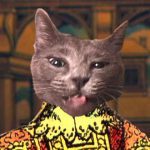 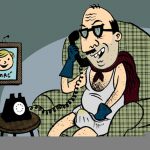 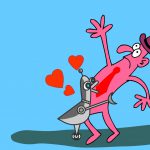 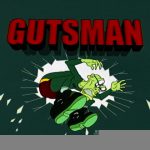 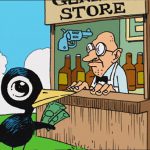 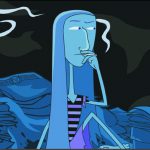 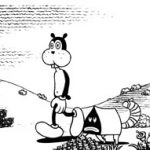 Ivan Brunetti – www.ivanbrunetti.com
Named after Ivan the Terrible, Brunetti was born in a small town in Italy on October 3, 1967. At the tender age of 8, he moved from his grandparents’ Italian farm to the industrial South Side of Chicago; and has lived in this fair city ever since. He has worked at a series of unglamorous occupations, gone to college, fallen in love, and then watched his life unceremoniously crumble. Somewhere in there, he began drawing intensely personal, notoriously suicidal, and just-plain vile comics, perhaps as a reaction to bitter regrets and dashed idealistic hopes. He’s actually a wistful, heartbroken, sweet-natured fellow. He now lives with 2 cats and an antique mannequin and has made his peace with the saha world and lives in relative harmony with the universe.

Sam Henderson – www.magicwhistle.com
Funnyman Sam Henderson has most recently been seen writing and directing for SpongeBob SquarePants. This Ignatz and Harvey Award-nominated cartoonist draws a book called The Magic Whistle (Alternative Comics). In addition to a regular strip in Nickelodeon magazine, Sam’s work has been featured in The New York Press, The Stranger, Comics Journal, Heavy Metal, Zero Zero, Word, and Screw.

Walt Holcombe – www.sniffpants.com
Born in San Antonio, TX in 1969, Walt Holcolmbe’s first word was “flower,” which explains a lot. After spending his miserable, formative years in the rural West Texas town of Pecos, Walt attended film school at the University of Texas at Austin, but discovered he was better suited to the solitary craft of cartooning. His graphic novel The King of Persia (Accordion Press) won him the Eisner and Xeric Awards, as well as the Ignatz Award for Promising New Talent in 1997. His credits include work on Space Jam, animation for Nickelodeon CD-ROMs, and his comic series, Poot (Fantagraphics). Declared a “National Treasure” by President Jimmy Carter in 1977, Walt now lives in beautiful Los Angeles with his cat, Eartha Kitty.

Kaz – www.kazunderworld.com
Born in Hoboken New Jersey, Kaz studied comics under Art Spiegelman and contributed to the early issues of Raw magazine. His work was eventually collected into Buzzbomb. His illustrations have been seen in Entertainment Weekly, Esquire, Details, The New Yorker, GQ and Screw. Kaz’s weekly comic strip Underworld was nominated for a Harvey Award in 1996 & 1997. His latest works can be seen on SpongeBob SquarePants, in the children’s book Little Lit (Harper Collins), and the book collections of Underworld comics (Fantagraphics).

Tim Maloney – www.nakedrabbit.com
Tim Maloney escaped the cornfields of the Midwest for the charming horizons of Los Angeles. An alumnus of both Northwestern University and USC’s film schools, Tim has been making cartoons and films for almost a decade. His accolades include directing animation for Disney’s One Saturday Morning. He can also eat solid uranium without any harmful effects.

Lance Myers – www.lancefever.com
Born in Lubbock, TX in 1971, Roland Lance Myers became Lance Fever 22 years later when he moved to Austin and began drawing naughty cartoons. When hunger gets the better of him, animator Myers has to tear himself away from his own projects to work on such respectable ones as Space Jam, Anastasia, Prince of Egypt, and most recently, the video game Turok 4.

Tony Millionaire – www.maakies.com
Tony Millionaire is the creator of the comic strip Maakies. A hardcover collection of his most recent strips, The House at Maakies Corner (Fantagraphics) will be published in the fall of 2002. His new children’s book, Sock Monkey: The Glass Doorknob (Dark Horse) will also be released soon. Millionaire lives in Los Angeles with his wife and daughters.

Mark Newgarden – www.laffpix.com
Creator of the Garbage Pail Kids, Newgarden had long proclaimed the cheap novelty as the true art form for the 21st century and has unleashed a torrent of warped and weird gimmicks for everyone from Pee-Wee Herman to your local fast food trough. Newgarden has blemished an incredibly diverse array of publications from Raw to The New York Times. His work has also graced such venues as the Smithsonian, The Cooper- Hewitt, The Brooklyn Museum, the Society of Illustrators, & the ICA in London. In 1997, he served as story director on The Stinky Cheese Man & recently completed 4 episodes of B. Happy for cartoonnetwork.com. His animated pilot/holiday special Santax is currently being developed for the Cartoon Network.

Jim Woodring – www.jimwoodring.com
Born in L.A. in 1952, Woodring enjoyed a childhood of hallucinations and other psychological malfunctions. After barely graduating high school, Woodring worked as a garbage man and lived in picturesque squalor as he set out to capture his inner life in words and pictures. In 1980, he self-published JIM, containing drawings and stories from his indelible childhood (later published by Fantagraphics). Eventually, he landed a job in an L.A. animation studio where he made some of the worst cartoons this degraded planet has ever seen. His work has been featured in Kenyon Review, World Art Magazine, and Zoetrope, to name a few. At present, he is working on the 5th issue of Frank and lives in Seattle with his family and residual phenomena.