LOOK TO THE SKIES!

This Deluxe Edition comes with a free 20-page comic book. 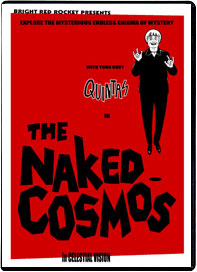 “The Naked Cosmos” contains four episodes hosted by the enigmatic “Quintas,” a TV prophet promoting his Cosmic Connections to the Collective Mindstream. He does so through “The Naked Cosmos,” his weekly program.

To help him along is an unlikely crew of regulars: Mr. Mims, the nervous, anxious announcer; Mistress Velda, the lovely cataloguer of celestial events; Ego, Master of Teleportation; The Chief, who wears a leopard mask and barks out orders in Spanish; and Zansky, the strange collector of bizarre films who hails from Dimension 9.

But the show doesn’t always go as planned. Despite his regular guests and allies, Quintas has a deep and troubling conflict with his own clone, the dark and mysterious Kalisto, whose philosophies are scientific and rational, in direct contrast to the intuitive Quintas.

Tensions build, initially as a result of rivalry over the beautiful Mistress Velda. But soon no power can stop the Battle of the Century, as the two clones duke it out at Area 51, the infamous nexus of cosmic, alien power.

“The Naked Cosmos” is like nothing you’ve seen, unless you are regularly tuning in to television from another galaxy. It’s made all the more impressive because the writer and director is also playing most of the parts. Comic artist Gilbert Hernandez, award-winning co-creator of “Love and Rockets,” shows a hidden side of his talents as a rubber-faced comedian, able to take on half a dozen roles with distinct voices and personalities. No less remarkable are the female roles, all acted by Carol Kovinick, who brings a natural balance to Gilbert’s crazy energy.

This show is like “Pee-Wee’s Playhouse” if Uri Geller produced it on Saturn. It’s a fond homage to the kid’s show and horror hosts who have long disappeared from the UHF bands, and a love poem to the B-movie science fiction and monster films that used to play late, late at night when you should have been sleeping.